Fossil specimens can be divided into one of two categories, macrofossils and microfossils. Macrofossils may be held in the hand and examined with nothing more than a good hand lens. Microfossils are very small and require a microscope to view them effectively. For practical reasons the members of the Kent Geologists' Group further restricts the definition of 'microfossil' to those fossils having a size in the range 1000 microns (1mm) to 50 microns.

The website is maintained as a tribute to Jim Craig who collected, prepared and photographed the fossils and designed the original website.

Fossils smaller than 50 microns are called nanofossils; they include pollen, spores, dinoflagellates and coccoliths. They are excluded from the KGG definition of microfossil because their study requires the use of dangerous chemicals (not available to the amateur) and high power microscopes. These restrictions put the study of nanofossils very much into the realm of the professional palaeontologist.

The KGG does not restrict the definition of 'microfossils' to fossils of micro-organisms. Fossil remains occurring in sieved residues between 16 mesh (1000 microns) and 325 mesh (50 microns) will include interesting items such as small juveniles and fragments of macrofossils that would otherwise be excluded from the normal definition of microfossil. The result can be a very interesting and productive field of study.

Microfossils can be extracted from almost all fossiliferous sedimentary rocks - unconsolidated marine sediments being the most productive. The scientific value of the extracted fossils depends on the care taken in their extraction. It is essential to avoid contamination of the sample, which should be labelled clearly and securely in the field. The re-use of sample bags is not recommended and sieves should be thoroughly washed between processing sessions. 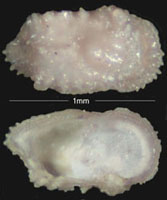 Unconsolidated clays, silts and fine sands are most easily processed and often yield rich and varied assemblages of well-preserved fossils. The sample should be dried thoroughly, then soaked in hot water to disaggregate the sediment. The resulting 'slurry' should be wet sieved. A dispersing agent such as 'Calgon', dissolved in the water at the soaking stage, can be helpful in breaking down the sediment. The 'dry/soak/sieve' cycle should be repeated two or three times to obtain a clean sample. It is worth taking trouble at this stage as it makes life so much easier later on.

Eight inch diameter brass test sieves are recommended for sorting the residue though these are very expensive. As an alternative, one can make sieves or buy cheaper sieves, though these are unlikely to last as long as the better quality product. Sorting of residues is made easier if a graded series of sieves is used; preferably with the aperture of each succeeding sieve being about half that of its predecessor.

Finally, the chosen sample should be sprinkled sparingly onto a picking tray. Using a microscope, preferably a binocular stereo model with magnification of 10x to 40x, selected fossils are removed using a damp artists' brush (size 000 or 0000 recommended) and are placed in a multi-cell slide for study.

Here is a discussion on types of microfossil with associated sketches:- Illustrated Microfossils