The Foraminifera are an order of the Superclass Rhizopoda. Popularly called just "forams", they start life as a minute single cell of protoplasm that secretes a hardened shell or "test" containing one or more holes. The order takes its name from the latin foramen, plural foramina, meaning a hole.

During growth, the protoplasm expands through the holes to the outside of the test where it again secretes a hardened shell. The process is repeated so that the foraminiferan gradually builds a chambered structure in which the chambers are linked by foramina but the protoplasm remains contiguous, thus retaining the single cell status. 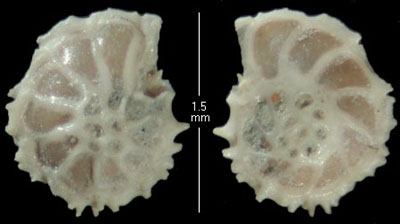 Forams exist in both benthic (living on the sea floor) and planktonic (freely swimming) habitats, and are found in virtually every marine sediment. They feed on bacteria and minute algae captured with thread-like pseudopodia which protrude through holes in the test. Forams are known from the Cambrian to the present day and, because of their abundance and ease of study, are important as biostratigraphical indicators.

The foraminifera are divided into a number of sub-orders according to the nature of the test; whether it consists of Chitin, agglutinated quartz such as sand grains or sponge spicules, or calcite. It is predominantly the species with a calcite test that are preserved as fossils.

The taxonomy of the foraminifera is based on the composition of the test and its layering, the architecture of the chambers and the holes linking them. The chambers may be globular or tubular. The tubes may be staight, coiled or a combination of both.

If you want to learn more then read "Mesozoic/caenozoic Foraminifera" written by Adrian Rundle for a Geologists' Association workshop in January 2002. Also, watch out for a future workshop on the topic.