Lime was a major constituent in making mortar for ancient buildings. The lime ('quick-lime' or calcium oxide) was made in lime kilns, many examples of which are dotted all over the country. The operation of the kiln was laborious. A fire was layed; the kiln was loaded with limestone and charcoal, coal or coke; the fire was lit; the limestone was roasted for many hours; then the kiln was allowed to cool before the lime could be removed.

This picture was taken inside the Hoffman ring kiln at the Llanymynech Heritage Site in Shropshire, during a recent KGG field trip.

The Hoffman kiln dates from the late 1800s and is a 'doughnut-shaped', brick-built structure that can be used both for making lime and baking bricks. Its annular duct, typically eight feet high and twelve feet wide, can be divided into 12 to 14 cells. The cells can be loaded independently and sequentially through the apertures shown, and coal was loaded through ducts in the roof. The ring kiln thus provided a continuous operation; one of our early attempts at mass production. A tall chimney, some yards from the circular kiln draws air through the kiln to give very efficient operation, whether making lime or drying bricks.

Sadly, the kiln was only operated for about thirty years because the advent of Portland cement reduced the demand for lime.

The heritage site is a very interesting example of industrial archaeology, with mineral connections, and is well worth a visit. 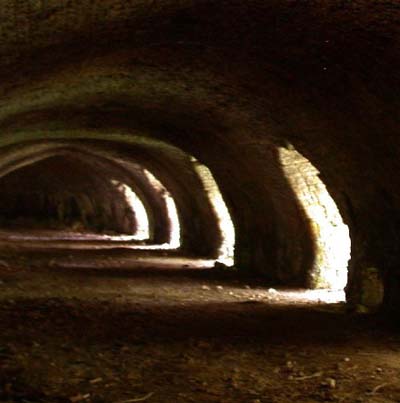