There are many forms of opal that are prized for their play of colours. Common opal is not normally included in these prized specimens but does produce fine fluorescent specimens. Common opal from New Jersey fluoresces bright yellow-green in both long wave and short wave ultraviolet radiation.

Common opal from Australia exhibits either no fluorescence or pale blue fluorescence. Males (1973) attributed the difference to wide spread contamination of American strata by uranium.

Webster (1983) and Arem (1987) attributed the green fluorescence of New Jersey opal to uranium minerals present in the opal as impurities or, to be more precise, to the uranyl group (UO2).

This specimen of opal is from Ogdensberg, New Jersey, and is shown fluorescing under short wave ultraviolet radiation. 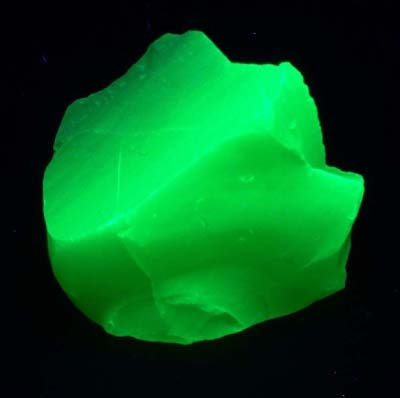