Bryozoans are aquatic invertebrates of the phylum Bryozoa and live in colonies called a zooarium. The colony forms a brancing structure, the skeleton of which is made of chitin or calcite. Bryozoans range from the Ordovician to the present time but only those with a calcite skeleton have survived as fossils. Bryozoans were important reef builders during the Palaeozoic.

Modern Bryozoans are called moss animals. They occur at all depths from tidal to abyssal.

The picture shows Adenelopsis wetherelli from the Eocene. The fossil was found on the Isle of Sheppey in Kent, England. 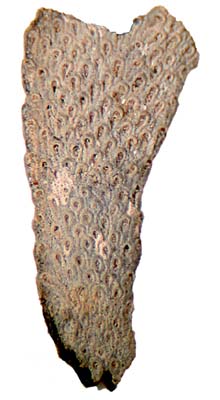