Mammals have a bone skeleton and characteristic teeth and first appear in the Triassic period, but remain very rare until after the end of the Cretaceous period.

This picture shows the jaw of Acotherulum saturninum, which is from the Headon Formation on the Isle of Wight, England. It is of Eocene age. The photograph is actually of a cast that was made when the original specimen was donated to the Natural History Museum in London, England. 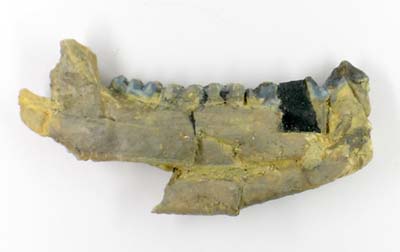